by Alexandra Schmidt and Robert Gisshammer

Star Trek – Beyond is the third instalment in the series of movies set before the original Star Trek TV series, featuring Captain James T. Kirk [Chris Pine] and First Officer Commander Spock [Zachary Quinto]. Young Jim Kirk is not sure whether he wants to serve as a captain much longer. The missions are interesting but begin to feel a bit episodic. Spock is feeling uncertain about whether he should remain a starfleet officer. Vulcan, his home planet, needs him too. We all know they will stay in the end. Star Trek – Beyond tells us why.

A mission fails and Kirk demolishes his ship once again (as in the previous movies). The crew is stranded on an uncharted planet. They encounter a new species that possesses unexpected skills and weapons, as well as their leader, sinister and angry Krall [Idris Elba]. Many of the crew die, the rest are kidnapped, and most of the leading officers are scattered across the planet. But they also find help: courageous Jaylah [Sofia Boutella], who Scotty [Simon Pegg] is quick to nickname “lassie”. Will the crew be able to get out of Krall’s clutches?

[Watch the trailer here or scroll down to continue reading]

Robert: Alexandra, you are a true trekkie who knows all the movies and all episodes of the various Star Trek TV series. You were even wearing your Next Generation uniform at the advance screening of the new movie. What does Star Trek mean to you and how does the new movie fit in?

Alexandra: Star Trek has a vision of future societies and shows what they could be like. The starfleet and the federation are one huge peace mission – they always seek diplomatic solutions first. Star Trek showed the first kiss between a black and a white person on television. The latest film shows a gay couple raising a daughter – without making a great fuss about it. And there have always been many women in leading positions. I like the idea of evolution driven by curiosity, true interest and dialogue. Learning from each other, understanding a yet unknown species and respecting their peculiarities to enrich the federation – I like that ideal. I wish we were a bit more like that here on earth, my favourite planet ;-) As far as I’m concerned, Star Trek – Beyond could make an even stronger statement with regard to that.

But how about you, Robert? You only know Star Trek – the original series. But you have watched it multiple times. Now you see how things began – in films that feature future technologies as envisioned in the 1960s, while presenting them using present-day film technology. What do you think of the action, the plot and how this movie executed?

Robert: That’s right, I never watched The Next Generation or Deep Space Nine. But Star Trek belongs to my most important childhood TV memories. That’s why I will always measure the new movies against the original series with William Shatner and Leonard Nimoy. Star Trek – Beyond feels like an overly long episode from the original series. From that perspective the movie worked well for me.

The most striking difference is the action, though. Not only because the modern movies use CGI extensively. J.J. Abrams directed the two previous films, while this one is directed by Justin Lin, who is well known for his Fast and Furious movies. The style of the action scenes has changed. They are now very similar to the action in Fast and Furious. People survive falls from absurd heights totally unscathed, and some cuts are so fast and confusing that I wanted to ask “Wait a moment! What just happend here? How did that go now?” That’s actually a pity as it makes you think the director just assumed the audience wouldn’t notice that kind of sloppiness as long as the pace is fast enough.

Apart from that, I have the impression Justin Lin wants to win over his Fast and Furious fans for Star Trek. There are stunts with Kirk on a motorbike(!) and shrill punk music by the Beastie Boys. These are things that have no place in a Star Trek movie, in my opinion.

What do you think of Star Trek – Beyond from a feminist point of view, Alexandra? 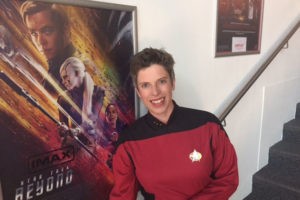 Alexandra: The gender roles of the characters are very well done. The leading lady is super-sexy, but she’s not all about that. What counts is her courage, her persistence, and when she shows Scotty how things work it’s quite charming. Uhura and Spock are a perfect straight couple – but Spock is vulnerable as never before and Uhura has an important mission to save the crew. I would have liked to see more of that to be honest. And, yes, Sulu is in a same-sex relationship and he and his partner raise a daughter. So what? Kirk is portrayed as a daredevil, which, to be frank, was a bit too much for me. Yes, he is a go-getter, especially in his younger years, but he is also bold, courageous and decisive. Well – at least those scenes made me laugh, so it was ok, I guess.

What’s your opinion of the characters, Robert?

Robert: I thought, the entire cast was great. All the Star Trek characters are recognizable without any of the actors trying to imitate their famous predecessors. One thing that was truly outstanding in Star Trek – Beyond: Bones [Karl Urban] and Spock are about to come into their own with their famous banters. Bones has nothing but sarcastic comments for Spock, whose irresistibly logic retorts make Bones eat his own words. These are the most hilarious moments in the movie.

With all those positive things about the portrayal of the characters said, it’s a pity that Lieutenant Uhura [Zoe Saldana] has to stand back behind Jaylah. Uhura has a few important scenes in the movie, but her story is told rather incoherently, which takes away a lot from her character’s power.

Unfortunately, a real side issue was completely blown out of proportion beforehand: so, Sulu [John Cho] is gay and has a family. Get a grip! I hope, Star Trek fans will begin to talk about something much more important: Sulu shows nerves of steel, he is tough and simply kicks ass in this movie. Way to go, Sulu!

But Star Trek has always dealt with the bigger questions of life. How about that in Beyond, Alexandra?

Alexandra: Well, yes, there are big issues besides all the action: Is fear of death illogical? Or does fear of death keep us alive? Does fighting make us stronger? What is a true hero? Does it pay to risk one’s own life to save another? And who would risk their life for mine? Why is a Vulcan liver as important as a human heart? Well, that last question may not be as important …

But, yes, I had to laugh out loud in places, and the film gives you something to think about on your way home. But I am a big fan of Star Trek and I listen very carefully between the lines. Somebody not so familiar with the Star Trek philosophy might only see the action on the surface.

Robert, what does the title mean to you?

Robert: „Beyond“ refers to the crew going into uncharted territory. Apart from that the movie fails to push boundaries, I’m afraid. But as a Star Trek adventure it is still well executed and worth watching.

Robert: I always give my rating on IMDB – and I’ll give Star Trek – Beyond 7 out of 10 points.
How about you, Alexandra?

Alexandra: Well, I liked the movie and it’s a worthy addition to the previous Star Trek movies. It is not my absolute favourite, though. 7 out of 10 seems fair to me too. 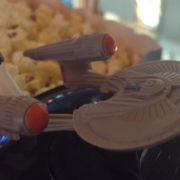